Radon – what is it, and what are the risks?

Radon is a colourless, odourless, radioactive gas, a decay product of uranium in rocks and soil.

Radon is found across Canada. Concentrations differ greatly but are usually higher in areas where there is a higher amount of uranium in underlying rock and soil.

Do you know if your building needs to be tested for Radon?

What are the Health Risks? ☢

When radon is released from the ground into the air out in the open, it is sufficiently diluted and not a health concern. However, in enclosed spaces in buildings, radon can sometimes accumulate to high levels that become a health risk.

Radon gas breaks down or decays to form radioactive elements that can be inhaled into the lungs. In the lungs, decay continues, creating radioactive particles that release small bursts of energy. This energy is absorbed by nearby lung tissue, damaging the cells. When the genetic code of the cells is damaged, they have the potential to become cancerous.

Exposure to high levels of radon in indoor air results in an increased risk of developing lung cancer. The risk of cancer depends on the level of radon and how long a person is exposed to those levels, but the risk is real.

The current Canadian guideline for radon in indoor air is 200 becquerels per cubic meter (200 Bq/m3). A Becquerel is a unit of measurement equal to one radioactive disintegration per second. 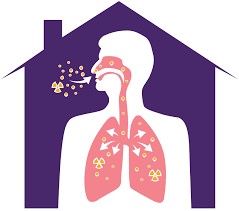 How do you Test for Radon in Buildings? ☢
Health Canada recommends that the radon test performed in a home or public building be a long-term measurement (testing period of 3 to 12 months), ideally conducted during the heating season, and placed in the lowest occupied areas of the building. Higher radon levels are usually observed during winter months when buildings are sealed up and when the pressure differential between indoors and the surrounding soil are at their greatest. Radon measurement can be completed on its own or be included as part of an Indoor Air Quality (IAQ) Assessment.Currently, radon is not regulated; however, Health Canada has radon guidelines noting the acceptable levels of radon within buildings.  Some building certifications incorporate radon into their prerequisite process, including but not limited to the following:
RiskCheck technicians are certified by the Canadian – National Radon Proficiency Program (C-NRPP) as radon measurement professionals.
Contact us today to learn more about how we can help you manage the risks associated with radon.
For more information, please use the contact us form on the right side of this page.

Leave A Reply Radon – what is it, and what are the risks? Cancel reply

Our unique system allows multiple modules for risk management to sit seamlessly on the same platform, customized to your business needs. You are able to view and manage several areas of risk vertically, which allows for easier access to information that relates across your portfolio.